“…potentially the greatest Democratic victory in the midterms.”

– The Washington Post on Scott Walker’s defeat in the Wisconsin governor’s race.

Many people said Scott Walker could not be beaten.

They said Walker had too much money
(he did).

They said Walker’s political machine was ready to waste the Democratic nominee
(they were).

They said Walker was a political mastermind having been the first governor in the country to survive a recall election
(he was).

At Strother Nuckels Strategies we were proud to have served as the media consultant  to Tony Evers’ stunning upset of Scott Walker.

Many things contributed to Tony’s incredible victory. But, from a media perspective, we focused in on good storytelling + cutting-edge targeting in order to cut through the clutter.

Voters understood that Scott Walker was a typical politician.  They knew Walker was too close to the special interests and his donors.  But voters didn’t connect Walker’s political decisions to the negative consequences affecting them and their families.

Our challenge was to connect those dots.

We did so with powerful stories from across the state. Below are a few of those stories:

Humor takes the sting out of…well…the sting. And while political ads were once heralded for taking down opponents with a chainsaw, today humor is often much more powerful and moving. We used humor to tag Walker on his use of the state airplane.

What’s it like working for politician Scott Walker?
Just ask those who’ve done it.

Below is one of several ads we ran that featured former Scott Walker cabinet appointees. Throughout the campaign former appointees generated news by criticizing their former boss on issues very important to voters. We featured various cabinet appointees individually in their own web content as well.

Education Governor? Not so fast

Heading into the General Election Scott Walker proclaimed himself the “education governor.” This was, of course, a laughable notion given that he cut $800 million dollars from Wisconsin schools. In several spots we turned Walker’s self-given nickname on itself:

And with this fast-turnaround social media video hit (including a jab at long-time Green Bay Packers’ rival, the Minnesota Vikings):

As with nearly every election, subsets of voters want to hear about specific issues that impact their families perhaps more than others. In the Evers campaign, Western and Central Wisconsin male voters needed to hear about Tony’s plan for transportation and roads. So, we made a spot as tough as the men and women who build our roads.

Overall, the Evers campaign was outspent 2-to-1 by the Walker campaign. But initially, that number was 6-to-1 in some markets. The Walker campaign (and their allies) blanketed TV screens and filled mailboxes attempting to falsely define Tony as a Madison bureaucrat who allowed teachers to view pornography at work. Walker’s dishonest, vile attacks included graphic images and language not suitable for children.

Heading into the final weekend we knew turnout would make or break the campaign. There was an amazing field effort underway and our digital efforts were designed to supplement those critical tactics. Below are a few of the 6-second ads we ran on digital and social media platforms targeting marginal voting Democrats across the state in the final weekend. With only 6 seconds, you have to grab a voter’s attention quickly with a simple message: VOTE!

Display advertising can often reach websites where digital video is not available (particularly for mobile devices). We utilized the full suite of digital tools including digital video, display ads (shown below), programmatic digital audio, and voter-file targeted native sponsored content. Throughout the campaign we tested various colors, issues, and setups to determine which ads performed best – then we shifted traffic to those better-performing ads. Below are a few examples of some of the display advertising from the campaign (including response advertising to beat back various false attacks). 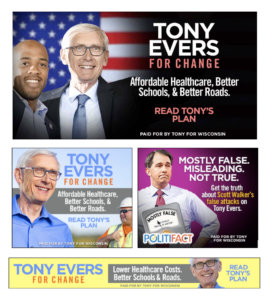 “On a night of statewide defeats, taking out Walker will carry even more significance to Democrats nationally.”

With all the clutter and yelling in the political ads saturating televisions across the state, we wanted Tony’s closing spot to stand out through an honest, quiet strength.

The Evers campaign was filled with all stars – everyone on the campaign went above and beyond.  And, there were many very helpful outside groups  all working to help defeat Walker (special shout out to the DGA and their team).  We are very honored and proud to have worked for Tony. The stakes could not have been higher.

“Holy moly, that’s a big one. There will be much joy among Democrats over the Walker defeat”