In the last election, we helped the United Association of Plumbers and Pipefitters (UA) break new ground when it comes to targeting and delivering key messages to their union’s membership. We needed to make sure that UA members had the critical information they needed to know before making their choice in the fall election. We did this through a variety of messages from the UA’s General President Mark McManus as well as candidate-specific advertising by state. Below are some examples and an overview of our work.

In the past, when delivering the messages that the UA membership needed to hear, the union relied mainly on direct mail.  While that approach may have worked in the past,  today’s media environment is highly fractured. Members (like voters) receive their information from a variety of sources throughout their day – TV, radio, online, social media, newspapers, etc.

That means utilizing just one method to communicate with your membership is ineffective.

We helped the UA build on the old ways to communicate while seamlessly integrating new cutting-edge technologies. Combined, this effort created a “surround sound” to UA members.

Addressable Satellite: Think Direct Mail for TV
We custom-matched the United Association’s membership list to DirecTV and Dish Network and were able to advertise nationally to only UA member households. Roughly 25% of the union’s membership were satellite subscribers and this gave us a unique ability to deliver a high frequency of ads to member households with spots featuring the UA’s General President Mark McManus urging the union’s members to visit the UA website to find out more information about battleground races and encouraging them to vote.

The UA’s website contained information about the candidates and their votes that affected UA members. Unlike traditional television, with addressable satellite targeting it doesn’t matter if the target is watching old Leave it to Beaver re-runs or if they’re watching the MLB Playoffs… you’re buying a frequency to your target. So when that union member household turned on the TV, the UA was delivering a UA ad to their UA member’s eyeballs…  without the waste of advertising to everyone else who wasn’t a member of their union.

Union Member-Only Digital & Social Advertising
We custom matched the UA’s membership to online cookies and mobile device IDs. This allowed the UA to deliver ads directly to their members and speak to them on websites and social media. We delivered 30 and 15-second video ads and display banners across the web to UA members.  Additionally, we also found new ways to reach members through list-matched native sponsored content (suggested articles specific to the states), and programmatic digital audio.

Coordinated Media Message & Timing
We worked with the UA’s new direct mail vendor to time all of our messages – across all the various advertising channels  – to hit at just the right time with the right message. This created a “surround sound” effect for the membership.

“At the United Association we need politicians who will walk the walk.”

Below are a few examples of the campaign-specific ads we ran across the country. 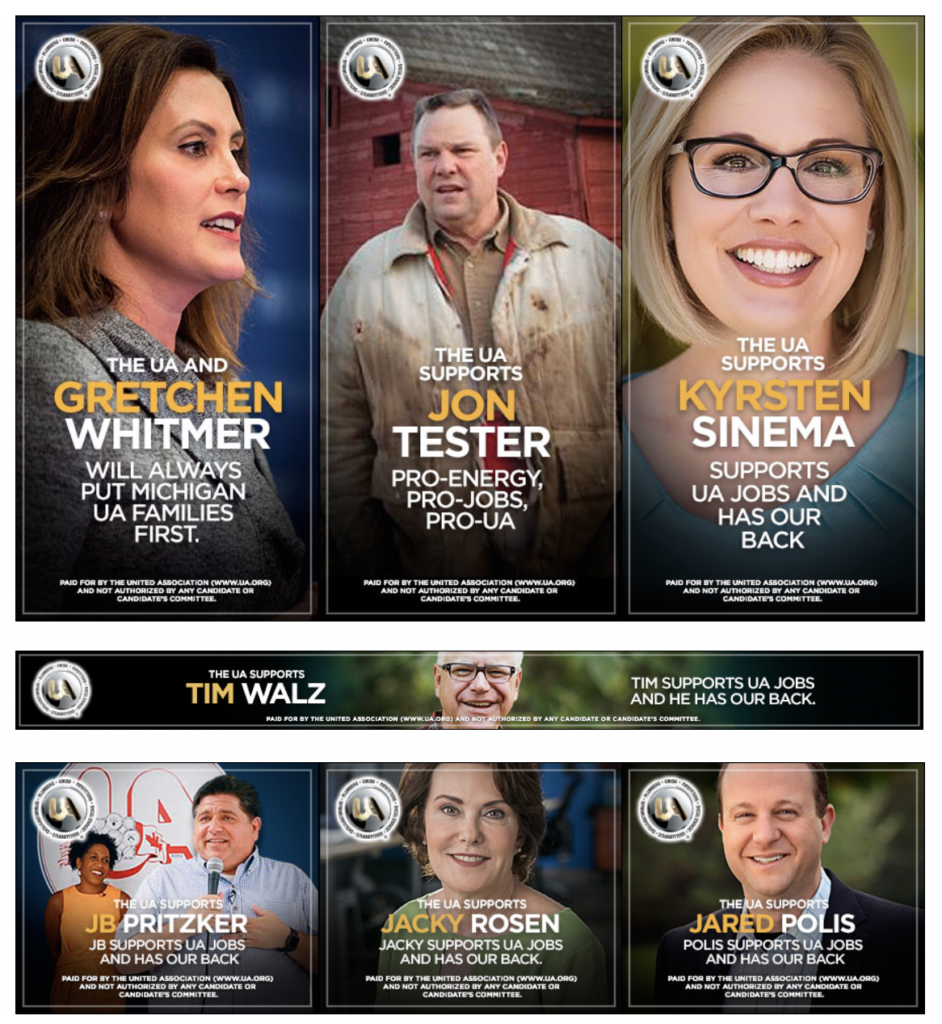 Battling False Attacks on Joe Biden with their membership

In 2020 the UA endorsed and ran campaigns at multiple levels for Joe Biden. One of the more important sub-campaigns they ran was an effort to push back against Donald Trump’s claims that Joe Biden was planning to ban fracking (particularly important issue to UA workers in Pennsylvania). We ran targeted campaigns at UA members making sure they knew the truth about Biden’s position.  Beyond the traditional member-to-member communications programs we utilized member-specific video, different types of social media posts (like the editorial-style cartoons), and mail.

In the end, in 8 of the top 10 fracking counties by production in Pennsylvania, Donald Trump’s voter margin went down in 2020 compared to 2016.

We worked with the UA to develop videos to better inform their union membership about the importance of Project Labor Agreements and prevailing wage laws while warning about laws that hurt the union’s ability to negotiate for better wages, benefits, and safety standards. Below are a few of the issue education spots we produced featuring UA members:

“Promises Made. Promises Kept. It’s a great day for the Teamsters”

The International Brotherhood of Teamsters hired us to develop a member-to-member communication around the American Rescue Plan that featured IBT General President Jim Hoffa.

We ran Independent Expenditure campaigns for both the UA and for LiUNA in various states at various levels from Congress to Senate to President. In the example below, we released an ad targeting Pennsylvania seniors shortly after the Bob Woodward tapes were released.  The Woodward tapes revealed that Trump knew how deadly the virus was while he was lying and concealing it from the public. It was a highly potent hit we needed to amplify with key voters.